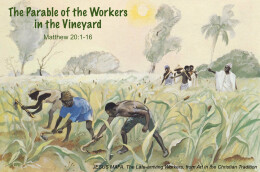 Series: The Season After Pentecost

In this morning’s scripture, the workers are familiar with the labor system. And there are numerous laws both biblical and in the Talmud that protect workers and landowners. The landowner in the parable you heard doesn’t do anything to break any laws. He gives those that were there first – those who showed up bright-and-early ready for work – exactly what they were promised.

And even the fact that those who came last got paid first is not breaking any laws, but it is a strange behavior that causes everyone to pay attention. This isn’t how it’s usually done. The landowner changed up the usual order of things, like a pastor who changes up the order of service: putting the announcements in the middle of a sermon say, it would be strange; but it wouldn’t break any rules. The sense of injustice comes when the workers who are waiting to get paid witness those who have only been there a few hours make as much money as they do. It’s not that they’ve been short changed, it’s that their neighbors are getting the same amount of money. That’s not right, we worked harder, we deserve more, they say, it’s not fair. Which is exactly what the reaction would be for any of us today.

To which the landowner says,

“Am I not allowed to do what I choose with what belongs to me? Or are you envious because I am generous?”

Generous it may be, but it still doesn’t seem fair or just, in a system where what is right and what is just is revered.

It’s easy for us to feel envy, to feel envious of what others have or what others do these days.  We call it COVID envy. If you recall we began this pandemic with that saying that was preached in numerous sayings and written in articles, “we're all in the same storm, but we’re not all in the same boat.” That was a reminder that this virus affects us differently because our circumstances are vastly different. While the pandemic exacerbates the problem, the truth is that that reality existed long before the pandemic. We are living the same trajectory of life, but our boats, that is our basic provisions, are not the same, and when a storm hits, any one of the ups and downs of life’s challenges – those challenges will be met differently depending on the circumstances our lives.

That’s why I encourage you always to make it a practice in your daily life – before you make any assumptions about anyone, in traffic, at the store, on the phone – to remind yourself first, that you don’t know them, and have no idea what kind of boat they’re in. We can all benefit from practicing the assumption that others are doing the best they can at any moment in time, even when it appears to us, on the surface, that they’re not trying hard enough.

Today’s parable is no different. There’s so much we don’t know about those who were late to the work party. Those who were not there at the break of dawn with a lunch pail and a proper work shirt and boots. There’s so much that most of us here today don’t know as people who were mostly born into homes where we wanted for very little. That may not be true for all of us, but I’m willing to bet that the majority of us, based on our conversations, grew up in homes that allowed us a pretty comfortable life, with food on the table, clothes to wear to school, a decent education, an ability to attend college. Most of us have experienced what we might call a leg up. The problem is, we don’t think of it as a leg up because we don’t stop to imagine what it’s like to get through without any  of those things.

My grandfather – who came to this country on a boat in 1913 not speaking English, and put in the first grade at the age of 13 – went on to become an engineer for the city of New York. He believed in education and hard work. Like so many of us, he believed that all a person has to do in this country is work hard and you too can live the good life.

That may have been true for him and many other immigrants, but what happened to that ideology during the Depression? There are limits to the belief that all you have to do is pull yourself up by your boot straps when faced with the extraordinary circumstance of unemployment rates, pandemics that are disproportionately affecting the disadvantaged.

In the same way, those in First Century Palestine believed, like many who follow a prosperity gospel theology, that if your life is good, you’ve earned God’s favor, you’ve thought about it right, you’ve done it right. The problem with that thinking is that it leads to:

“the Misconception being that People who are losing at the game of life must have done something to deserve it, like not worked hard enough.”[1]

How do you tell a single mother of three children working two jobs, without a car, and no savings that if she only worked harder, she too could have it all? Or worse, like in the book The Secret,  that if she just creates a poster board filled with all the things she wants in life that she can manifest because the universe will match her positive energy.

The workers in the field were angry at the landowner's generosity, without ever considering the circumstances or the quality of the lifeboat they were in. The truth is we will never know and can only imagine, but we can make an educated guess based on what we know about Jesus in Matthew's Gospel. By the time we get to Matthew 20 we’ve heard the Beatitudes, the first of which is the blessed poor, we’ve heard the parable of the lost sheep, we’ve witnessed time and time again the son of God live his life according to God’s ways, which Isaiah reminds us, are not our ways:

“my thoughts are not your thoughts, neither are your ways my ways.”

Jesus, who time and time again exemplifies that his ways are anything but the norm, taking in those who are not in, those who are misunderstood, judged, kept out, and at a disadvantage in the eyes of the unjust society.

It’s likely that the ones who are found by the vineyard owner, late in the day, are the unwanted. Who spends the whole day waiting to be hired but doesn’t find success until the end of the day? In Jesus’ time, these would be the weak, infirm, and disabled. Maybe the elderly, too. And other targets of discrimination, (such as people with records who have served time,) or anyone with a bad reputation.[2]

In today’s context, they might be those who recently got laid off, couldn’t pay last month's  rent, are sleeping in their cars. Maybe they’re the ones we didn’t notice before the pandemic, but who we notice more now, because the pandemic is hitting those who are at a disadvantage even harder, communities of color, those without the same privileges we take for granted, like a roof we own, clean water, affordable healthcare, and even clean air. (The last on that list being something that no one in the Western states is taking for granted these days.)

The landowner searches out those who didn’t show up, or couldn’t show up, or didn’t feel worthy of showing up. We’ll never know. But are we envious because of a God whose sense of justice extends first to those in need?  Does it threaten us to think that there’s enough to go around for all God’s people? In the context of today, this parable should wake us up to considering  who is in need of what should be a basic right in a society that promises “justice for all.”[3]

People who are hungry, sick or in need are not free to the choose an ideology like “just work harder.” To hold the disadvantaged  to the same set of standards as those who were given certain privileges from birth is not only unfair, but according to the Gospel, it’s unjust, where the justice of God is concerned:

“my thoughts are not your thoughts, neither are your ways my ways.”

Our god is a god of overwhelming abundance. There is enough to go around, and as our country has expanded in size and stature so has the needs of those who are marginalized. Are we envious because of God’s generosity? Or do we embrace that our God is calling us to let go of shaming the other, and turn instead to making sure that all God’s children are ensured certain inalienable rights of:

Perhaps this parable reminds us not only to pray for the poor and those whom God includes in God’s kingdom first, but to also pray for those of us who are blind to the ways in which we alienate ourselves from seeing the problem.

In the words of Barbara Brown Taylor,

“Am I not allowed to do what I choose with what belongs to me? Or are you envious because I am generous?” asks the Landowner.

Let us proclaim through our actions – more so than our beliefs –that we are not envious, but an advocate for the justice of God whose ways are not our ways.