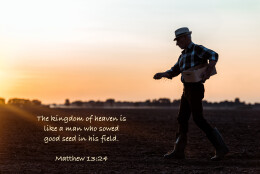 Series: The Season After Pentecost

There are two parts to this scripture. The first part is a parable about weeds and wheat. The second is the parable explained. The second part, the explanation, explains the parable as an allegory: the weeds symbolize children of evil, the wheat children of the kingdom. In the end, it’s God’s final judgment – the enemy destroyed, and the good seed remains and flourishes.

Now I’m all for a happy ending, where the good guys win in the end. But often I lose interest in movies and plays that present two dimensional characters and an oversimplified depiction of life. I prefer stories that reflect the complex nature of life, stories where it’s not entirely clear who the good guys or bad guys are. Complex characters are revealed by their motivations and history, how the bad guy got to be where he or she is. Or, to flip it, how the good guy became corrupt or chooses to do things which don’t reflect the goodness of their nature. I prefer narratives that surprise me when I find myself rooting for the bad guy, because the writer has written such a complex character that I can see the good in them, hoping they’ll find redemption, even if it means doing something we think is wrong to get it right. When characters unfold in complex ways, we begin to feel empathy for them, imagine having walked in their shoes, and finally realize, given the same set of circumstances, that the bad guy might actually be a good guy at their core, but instead made a series of bad choices, until they no longer recognize themselves. When that happens, we can begin to understand the possibility that that person we call bad, might easily have been us – given the same set of circumstances – and that redemption is possible, as long as we stop seeing them as all bad.

That’s my preference when it comes to story telling, or narrative and even scripture. This is not that scripture, at least not in the explanation. But in the parable itself, it’s not as clear; not as two dimensional.

In the parable, the servants logically assume that all they have to do is get rid of the weeds and life will be good, all good. But the master in the parable, says no, if you do that, you’re likely to destroy some of the good in the process. I imagine the weeds and wheat have grown so closely together they’ve become intertwined, so much so, it can be difficult to recognize where the weed begins and ends.

And that’s my experience of this life, and of ourselves. Our world, our cultures, our systems and structures and policies, our own personalities and even our actions, are not always clearly good or bad, and we live among the weeds, around us and within us. And maybe, that’s why Jesus instructs us to leave the weeding to God. It’s complicated, and God is still tending to the garden, the kingdom, in God’s way, which is sometimes entirely beyond us.

But if that’s true, then what are we to do? Does it mean we sit back and do nothing, letting the weeds to kill the wheat, choking what is good with no moral compass of right and wrong?

In the parable itself, before the explanation, the weed is not referred to as evil, but just a weed. And what is a weed? Whatever we don’t want growing in our backyard. There is a lot of ground cover, plants, bushes and growth that in and of themselves are quite lovely, until we decide we don’t want it around, and we name it weed. (There’s an excellent article from 2011, in the Wall Street Journal titled “Why We Must Learn to Love Weeds,” which goes into great detail around what happens when we begin to get rid of these plants – how it affects the natural habitat and the harm it ultimately causes.

So rather than naming a weed evil, what if a weed is instead that which we don’t want, which we understand as antithetical to our core values as followers of Christ? What is our call, when we come up against the complex three dimensional  “bad” guy, the one who is on the other side, the uncle who says the racist expletive, the friend who uses a homophobic word, the neighbor who thinks immigrants are the problem, the loved one who perpetuates stereotypes around Jewish people, the man in your workplace who seems more interested in what you wear then who you are?

Life is muddier and grayer then all bad or all good. But we tend to categorize these people when it’s not personal: the racists, the homophobes, the misogynists become two dimensional when we begin to categorize and shame whole groups as either bad or good.

Recently, as I said in my weekly email, I had a conversation with my old college buddies on Zoom. As we began discussing racism, the pandemic, politics, the challenges facing our country, the topic of shame entered the discussion. Some in the group felt shaming others is essential to creating change. They felt that shaming others should be used as a tool to effect change when it comes to racism or mask wearing. One person even added that they felt we should be shaming people for being fat.

Now it wasn’t hard for me to know that the last one was wrong. I knew in my bones that that would never work, because I lived it. I grew up as a chubby kid, chubby enough to be made fun of by other kids and adults as well. In 4th grade the boy I had a crush on called me weeble as I ran the bases in kickball, because of a toy commercial, “weebles wobble but they don’t fall down.” The cruel nickname stuck. In 6th grade, our coach called me out while I was jumping on the trampoline, in a gym filled with other kids, he called my out by my last name. “Hey Caubisens,” he yelled, “Try not to break the trampoline.”

By the age of 11, I was on a Weight Watchers diet, counting calories and trying to look like the other girls who seemed to be able to eat whatever they wanted and not get fat.  Society shames fat people all the time, whether intentional or not, and I’m here to tell you that it doesn’t change them into being thin, but increases the problem when people feel they’ve been excluded, looked down upon, and made to feel that they don’t belong or fit into societies idea of beauty.

Shame eventually led me into self loathing which led me into an on again off again battle with bulimia. What eventually pulled me out of that battle was not shame, but acceptance that I was good exactly as I was, curves and cellulite and all. Acceptance of what I looked like, and the disorder I developed, paradoxically led to change and healing.

When shaming fat people came up in the discussion, I was clear: shaming people about their weight would not be an affective tool towards change.

But I was less clear about how shame could be used as a social justice tool. Was it used in the Civil Rights era? Was it used as part of the women’s movement? Should it be used today in the face of groups that perpetuate hate like white supremacy?

To get closer to answering this question I went to the person who has made it her life work to study the subject of shame, Brene Brown. for those who don’t know, Brene Brown is a a research professor at the University of Houston and  has spent the past two decades studying courage, vulnerability, shame, and empathy, and is the author of five #1 New York Times bestsellers. In her podcast Unlocking Us, she has an episode on shame and accountability. I listened to it twice, while walking the dog.

What I wish I could do is just play the podcast for you, but we’d be here all day, so here’s the take away, and it’s important to know that much of what I’m about to say are paraphrases or direct quotes pieced together.

The first thing Brown does is to normalize shame. We all have shame, no one likes to talk about it, and the less we talk about the more it feeds on itself and takes control.

Shame is the fear of disconnection. Connection is what we’re hard wired for –  born to want to connect and belong, our brains and bodies hardwired for the need to belong and connect – as human beings that’s what we need and seek our entire life. And shame is the fear of disconnection, social rejection – the thing that gets in the way of what we need.

One of the biggest and best distinctions we can make is between shame and guilt. Guilt is I did something bad. Shame is I am bad. I’m an idiot, I’m a loser. That’s shame. When we identify with the thing we did that was bad as being bad ourselves, we are in shame, which feeds on itself leading to more bad behavior, because now I’ve decided I am bad. Shame is the intensely painful feeling or experience of believing that we are flawed and therefore unworthy of love belonging and connection.

Knowing and trusting that you are a good person, loved by God, who has done something bad, made the wrong decision, said the wrong thing, believed the hurtful thing, that’s guilt. When we realize what we’ve done is incongruent to who we are at our core, the more apt we are to change the behavior. The more we can say, we’re a good person who made a bad choice, the more we can change. (Not unlike the three dimensional characters in those narratives that reflect our complicated lives.)

The next distinction she draws is the difference between being holding others or ourselves accountable and being shamed.

We get confused when we believe we can shame people into being better – like a moral compass.

Like when speaking to a child who tells a lie. You’re a liar, or you’re a good person who told a lie which is not congruent with what we do in this family.

There’s a difference between holding others accountable and shaming them.

Brown reminds us that shaming others has been used throughout history as a tool of oppression, humiliation and belittling. Those are tools of injustice, not justice. Shaming is dehumanizing. When we dehumanize and condemn the other, the soil dries up, and the possibility of change dies up because the conversation has changed into the need to be right, instead of doing the right thing.

Brown gives us this mantra to carry with us:

And that mantra is perhaps the best answer that I could find to answer my own question. If we’re not here to get rid of the weeds, what are we here to do? As children of God’s kingdom, as Christ followers called to be the good seed, called to love neighbor, to love enemy, how do we do that while holding others accountable? And most importantly, holding ourselves accountable, or being held accountable by others?

Empathy is the foundation of love and justice, not shame.

Empathy draws us out of ourselves and into the other person, providing us the ability to look to the other person – and hold them accountable without demonizing them, without name calling, ranting and raving – dividing us into very good people and very bad people, but seeing them as people, who are not getting it right and need to be held accountable, giving them the opportunity to get it right the next time.

Empathy also allows us to say to the person who is holding us accountable, I’m sorry. I want to get it right. I’m going to get it right the next time.